Some of our readers may know that I'm one day away from a fundraiser Masquerade Dinner called Behind The Mask of Autism. We are raising funds for three severely autistic children, one of them being my daughter. The night is shaping up to be a fabulous one with a scrumptious three course meal, live band, celebrity MC's and a fun silent and loud auction with heaps of wonderful items that have been donated to us from all kids of people and places like restaurant vouchers, jewelry, sports memorabilia, home wares, limited edition books, art works and even a years supply of chocolates!!
This is the bit I wanted to share with you - one of our kind donors is a very talented and internationally known, award winning artist diagnosed with Autism, Tim Sharp. 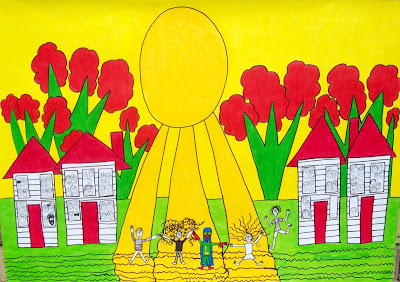 This is Tim's Story:
"At only 20 years of age, Tim Sharp has not allowed Autism to prevent him from achieving so much in his young life. Tim’s inspiring story has been documented on the ABC’s Australian Story and immortalised in the Eternity exhibition at The National Museum of Australia, his art has been exhibited at the Sydney Opera House, Washington DC and New York, and his work is sold to collectors throughout Australia and around the world, including London, Amsterdam, Los Angeles, New York, Washington DC and Hong Kong. Tim has twice been nominated as a Queensland finalist for Young Australian of the Year, and incredibly has overcome an initial prognosis at age 4 that the best thing that could be done would be to “put him away and forget about him”. That he would never talk, go to school or have any quality of life.
At age 16, Tim was the only Australian selected by jury in the young adult drawing category for the VSA (Very Special Arts) Festival in Washington DC. Australian Story (ABC) told the story of Tim’s trip to Washington DC and won awards for that story. At the festival Tim carried the Australian Flag into the opening ceremony at the John F Kennedy Performing Arts Centre and later met with John F. Kennedy’s sister Jean Kennedy-Smith who founded VSA arts 30 years ago. 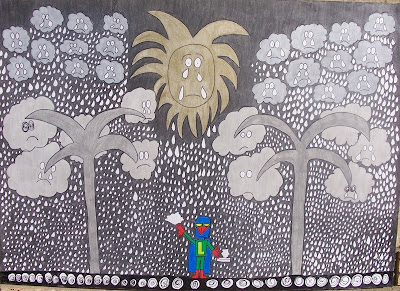 Tim’s art features the adventures of the colourful super hero Laser Beak Man, who he invented when he was 11 years old. Fans include Wayne Bennett, Ms Quentin Bryce the Governor General, Ken Done, Alex Perry, Alan Jones, The Wiggles and his latest exhibition in Brisbane was opened by Ms Anna Bligh Premier of Queensland. Now in its third year Tim has a touring exhibition with the Queensland Arts Council, he is the youngest person they have ever toured and also the first with a disability. He also has his own range of Laser Beak Man t shirts and a book.

Tim is a delightful, polite young man who is an inspiration to many. Art allows him to enjoy some of the things he wants most in life, a happy smile and friendship. The future is quite limited for Tim, he will always require full time care and support but Laser Beak Man is helping him to build a brighter future for himself and step outside the loneliness of Autism".

On the night of our fundraiser both the pictured pieces of Tim's art are up for auction. Half the takings of the winning bid will to the three children the night is in aid of and the other half will go to Tim. Thank you Tim!!
You can read more about Tim and see much more of his great artworks on his website www.laserbeakman.com
Posted by Giggleberry (Amy) at 10:22 AM

I recently came accross your blog and have been reading along. I thought I would leave my first comment. I dont know what to say except that I have enjoyed reading. Nice blog. I will keep visiting this blog very often.