Craft Corner - How to make a *real* Pirates Treasure Map

You might remember when I posted about my son's 1st birthday Pirate Party last time we had found a great AWESOME park to hold the party. The park has a huge pirate shipped shaped playground with slippery slides, swings, cargo nets and even a plank to walk! 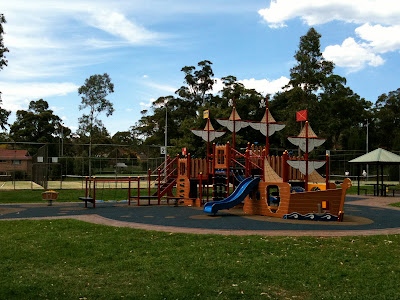 So last weekend hubby and I took our two youngest to the park for a play while we 'scoped' it out to plan a treasure hunt for the kids at the party.
We wrote down a handful of landmarks the park has e.g. BBQ area and I took a few photos with my trusty iPhone. Once the kids were worn out from all the pirate ship playing we headed home and put them down for a snooze then we got to Treasure Map making!
The idea is that the kids at the party, who are aged between 5 and 1, will (with the help of hubby) use the Treasure Map to find 5 hidden keys around the park. Once all 5 are found they will come back to a chained and padlocked 'treasure chest' and try each key until the padlock is opened and the Treasure (birthday cake) is found!

My very clever husband had the fantastic idea of looking up the park on Google Maps (I love that man) so we had a birds eye view of the park's layout and were able to draw a first draft of the Treasure Map on paper.

Everyone knows a real Treasure Map is always printed on tattered and dirty fabric so I had a dig through my fabric stash and found a piece of this natural linen fabric. I know it looks too clean and crisp but just wait...
With the help of a black permanent marker I drew (please remember: I'm a sewer not a illustrator) the 5 landmarks from the park we decided the keys could be hidden at and gave them each a 'piratey' name e.g. the tree with two park benches under it we called Lone Pirate's Tree. I then used a red permanent marker I drew a X at each key hiding spot because, of course, "X marks the spot".
With the map all drawn it was time to make the fabric look like it had been dragged from port to port by plundering pirates. Firstly I put it through a wash cycle and hung it on the clothes line for 24hrs scrunched up. This made the marker fade a little and put some great creases in it as well as fraying the raw edges. I picked up a small pile of dirt in the map and rubbed it into a few spots. Next I placed a couple of wet tea bags in various spots on the map then gathered the fabric around them and tied it up with elastics to hold them in place. The map then hung on the clothesline for another 24hrs letting the tea stain the fabric. 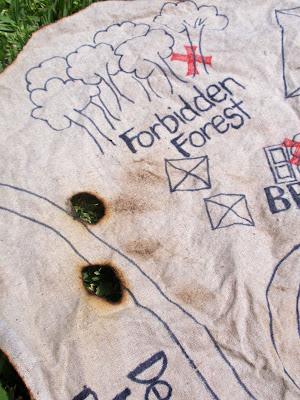 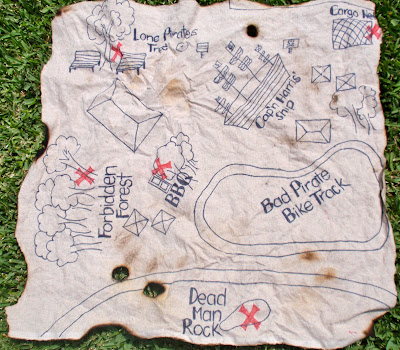 I LOVE how the map turned out and think the kids, well the older kids, at the party will be so excited to be going on a real pirate treasure hunt!